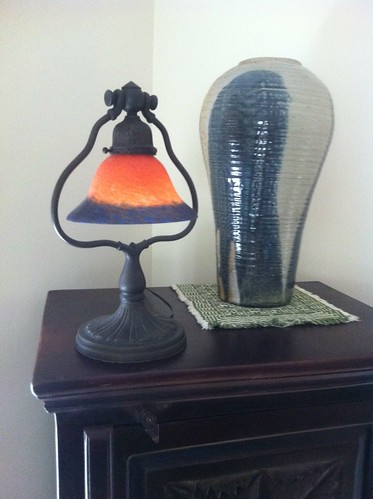 Killing  time recently in the city while waiting to meet some friends for dinner I wandered into the Antiques Garage, part of the hell's kitchen flea market system. Nearly out of the market without spending a dime, feeling virtuous, I glimpsed this stoneware vase in a stall and couldn't resist its beauty and grace.  I began fondling it and asked for its price. It's thrown by someone with amazing skills. The vendor knew little, if anything about it, though. He said it was mid-century and woodfired, and though there's a signature incised in its bottom, neither of us could make it out for anything but a scribble in the light there. I'm pretty certain it's soda or salt fired by the telltale orange peel texture at its top, which you can't see in this photo. Or, I guess it could be both wood and salt/soda fired. I know potters sometimes will throw handfuls of soda or salt into the kiln during firing to add to the surface effects. Any-old-who, this pot spoke to me and I wanted it. It felt so good in my hands and I had a spot in mind immediately in our living room where it would look perfect. I was not prepared to pay the price the vendor asked, but took his card, snapped a photo of it and told him I'd think about it.

Not able to get the vase out of my mind, I contacted him the next day with a substantially lower price offer,  which he accepted immediately, with no haggling, thank goodness.

Upon inspection when I got it home, the signature on the bottom clearly read "Turner." And I knew there'd been an important potter named Turner, so I immediately began researching on google. This pot doesn't look anything like what Robert Chapman Turner made most recently, thrown and altered pieces, before his death in 2005, but I DID find photos of some of his earlier pots that could easily be thrown and glazed by the same person and I found one photo of his signature online that looks remarkably like the signature on the bottom of this pot. I'm definitely curious about the pot's maker and history, but more because I'm a curious person who enjoys solving puzzles and mysteries, not because it gives the pot any more value to me. I'm going to contact the vendor about where HE bought this piece because I think it may offer some clues about it's provenance and maker.

If you're reading this and have any insight into whether it could be a piece by Robert Chapman Turner, drop me an email.
Posted by Yonkers Pottery at 6:18 AM No comments: 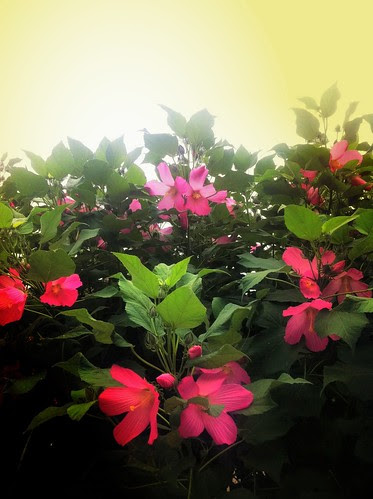 An old friend recently described to me how her eleven-year-old-daughter is always drawn to beautiful things. I related easily to this, always looking for and wanting to create and arrange beauty in my world. Deep beauty comforts and heals. Who wouldn't be drawn to it?

Walking through New York City's amazing High Line park one recent evening we beauty harvesters were taken by this floral sunset.
Posted by Yonkers Pottery at 7:23 AM No comments:

summertime, and the livin' is easy 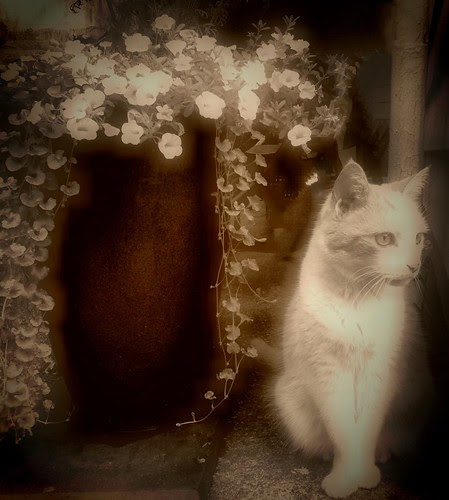 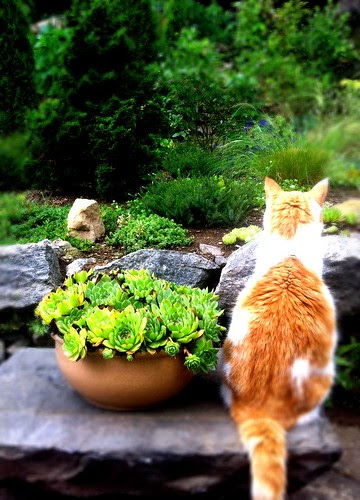 seen in our yard on a recent morning, a neighborhood kitty we call tres leches

Besides moments like the one for this recent kitty shoot, these lazy, slow days of our infernal new york summer are also providing relaxed time to work on my newest project, Yonkers Peace Pottery Studio.

Wherever you are, I hope you are cool and safe.
Posted by Yonkers Pottery at 5:45 AM No comments:

"A bit of advice
Given to a young Native American
At the time of his initiation:
As you go the way of life,
You will see a great chasm. Jump.
It is not as wide as you think."

-Joseph Campbell
Posted by Yonkers Pottery at 10:23 AM No comments: